Have You Installed
Microsoft Office On Your iPad 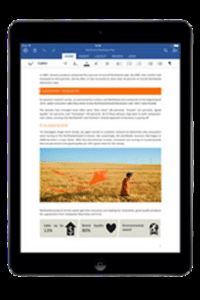 Used with permission from Microsoft.

After years of rumors, Microsoft finally unveiled Office for iPad in late March. This is a huge addition to the iPad, as demonstrated by the more than 12 million downloads of the product in the first week it was released.

The iPad Just Got More Business-Friendly

One of the biggest business complaints about the iPad has been that it’s great as a personal device and for catching up on e-mail, but you really couldn’t do real work on it. You can now use the core 3 of Word, Excel and Powerpoint on your iPad fairly seamlessly. Microsoft has integrated Office for iPad into their Office 365 suite of products with an annual fee of only $100, which includes online file storage (or you can simply view files in Office for iPad, but not work on them, for free).

A Familiar Interface And Functionality

Just about everything you're used to within the Office Suite is here on the iPad, optimized for touch screens. These three apps are feature-rich, powerful business tools. And while a menu item or two might be out of place, you'll soon quickly adapt to the user interface. If you've used an iPad and you've used Office on your desktop, you'll be just fine. Advanced features such as change tracking, find and replace are all there, and while there still may be a few things you need to do on your desktop, we're hard-pressed to find many of them.